This gives a preview of our team’s course project and the ultimate goal we wish to achieve by the end of the quarter. This project is designed so that everyone in the team can have something different to work on concurrently and learn various features provided by Unity framework. At the mean time, we also want the project to be interesting, not only yielding a result that is amazing to be played with, but also having a developing process that is enjoyable to us.

For the final project of this course, we are planning to work on creating an escape room VR game. It will be a single player game in which the player is confined in a limited game space filled with interactable game components.

Just like a typical escape room experience, in this confined game space, which probably will be an office, a living room, etc., player will be able to interact with all sorts of furnitures and electronics to find clues, solve puzzles and eventually get out of the room. But what special in this game is that we will fully utilize the power of VR to really give the player an immerse gaming experience like they are playing an escape room in the real life; actually even better with the environment we will be able to create freely with Unity.

For the gameplay, on top of the ordinary “search and find”, we plan to have (at least) three core puzzles that distinguishes our game from the other game. They are illustrated in more details below.

Detective Johnson is tracing a mysterious death of an old millionaire. That was a rainy day, and he was trying to rendezvous with one of his undercover informer near one of the millionaire’s old chalet. Fifteen minutes have passed the agreed meeting time, but the informer still has not shown up yet. Detective Johnson kept waiting…thirty minutes…one hour…until he has lost track of time… Suddenly, he was hit on the back of the head! Detective Johnson lost his consciousness…

When he woke up, he found himself in a dark room. Johnson realized that his hands were cuffed, and not only that, the room is located underwater, and water is filling up the room quite fast! Johnson will have to hurry now….. He needs to gather information from the room to find out the whereabouts of his undercover informer, and find a way to escape the room before the room is completely filled with water!

This is the play ground of the game, the room our player is trapped in. To increase the immersiveness of the game, we want to make it real. This room will be filled with interactly components, like furnitures, decorations and electronics just like a real room.

Most of these components will just be there so that the player will be able to play with and move around to increase the reality of the environment and give the player a basic idea on what kinds of interactions are allowed in this environment. Some hints & clues will also be hidden with these components.

Other components in the environment will be used to reveal the story line and give the player the some information of the environment they are trapped in to increase the imersiveness. For example, instead of giving the player the background of the owner of the house directly through narrative, we can put them on a letter on the table so players can explore it by themselves. Another example will be a window in the room to reveal some of the view outside and raindrops on the window to match the possibly heavy rain background music.

In our game, player will only being able to move like a human using the controller, not through any teleportation which can ruin the immersiveness of the game making it feel unreal.

In this game, we want to explore the effect of the limited vision to increase the imersiveness and the thrill of the game. Player will initially only be able to explore the environment through the flash light until they find the switch of the light.

More over, one of the puzzle in the game will be related to the flash light. To solve this puzzle, player needs to turn off the light to see the hints that will be invisible if light is on.

Radio Puzzle is basically simulating operating radio devices such as telegraph machines and some other normal radio devices. The expected design would be let the player operate these devices given a hint and find something to get out of the escape room. For example, a player would swtich to and hear from FM 105.3 to gather hints, but it could be more complex than this. The significance of this puzzle is about designing and creating radio devices, and the context could be situated at when world wars happened, as a soldier is trying to send or receive messages with a telegraph machine.

In this puzzle, we want to simulate picking a lock. This will both be a scene in the escape room game, and an educational tutorial too, as lock picking is actually not that easy in real life and we would like to give player a chance to experience lock picking in this game. Controlling lock picking tools with VR controllers can be challenging, so we are thinking of creating a very big lock and big lock picking tools to make things easier. Hopefully, players will be able to pick a lock in real life after playing our game a few times!

This week all the group members did Unity tutorial and experienced with some VR/AR devices available for our capstone projects. We also brainstormed our project ideas individually. The tentative project ideas we have are:

We evaluated the feasibility of each idea individually and our plan for next week is to discuss our ideas together and hopefully finalize our project.

This week we learned ARcore tutorial and started to discuss our project ideas together. Create team webpage. We listed the pros and cons of our topics and evaluated them. We also did some research on existed projects that are similar to our ideas. We found the projects like VR pottery, Drums Hero, etc. Therefore, we chose to develop a VR escape room with some creative features for our project. After finalizing our project, which is an escape room VR game, we wrote a proposal for it and filled the webpage with our initial project design. Our plan for next week is to present our project design to the class and start setting environment for our project. After getting familiar with the device we are going to use, we also want to build some initial settings for our project next week.

On Tuesday, we presented our project in front of the class and absorbed many creative ideas and suggestions from our instructors, TAs and classmates. One important thing is to make our escape room distinct from the others. For example, we could put some objects in our game that are not easily accessible in the real life, such as laser guns, make elements flow around and put our room on a plane or a ship. There were also several questions raised; we will have a 5-minute demo at the end so we should leverage the length and difficulty of the game and maybe give some hints when players need them. Moreover, it is significant to decide how players move in the game (teleport vs. actually walking), and we are stilling testing this.

On Thursday, Qian was setting up the environment and we together were looking for assets that we could make use of, as listed above. Basically, we have set up a terrain and a big house for our escape rooms and other VR headset stuff. Actually, we spent a lot of time testing out which asset is usable and suitable. However, we are not sure what to put into our Git (maybe just scripts and things we created?) because those assets could be as large as several gigabytes.

We had also decided several things:

A suggestion from our TAs is to settle down the overall game logic first and then add other game components, such that each week we could at least have a running version for people to try and test and we could fix bugs or adjust the difficulty correspondingly.

We have also added a section in the website for PRD as shown above.

For the next week, we plan to “shrink” that big house into a single room that is going to be our escape room, finalize the environment(to put the room in a ship or a plane and set up weather and lights), have all basic, usable assets ready(e.g. interactive radios) and finishing up player’s movement(teleport vs. actually walking).

This week, we finished setting up our main game environment–the room we need to escape from. We have placed many furniture, a secret chamber, light sources, texture for both the walls of the room and the floor, and many other decorations.

Here are some screenshots: 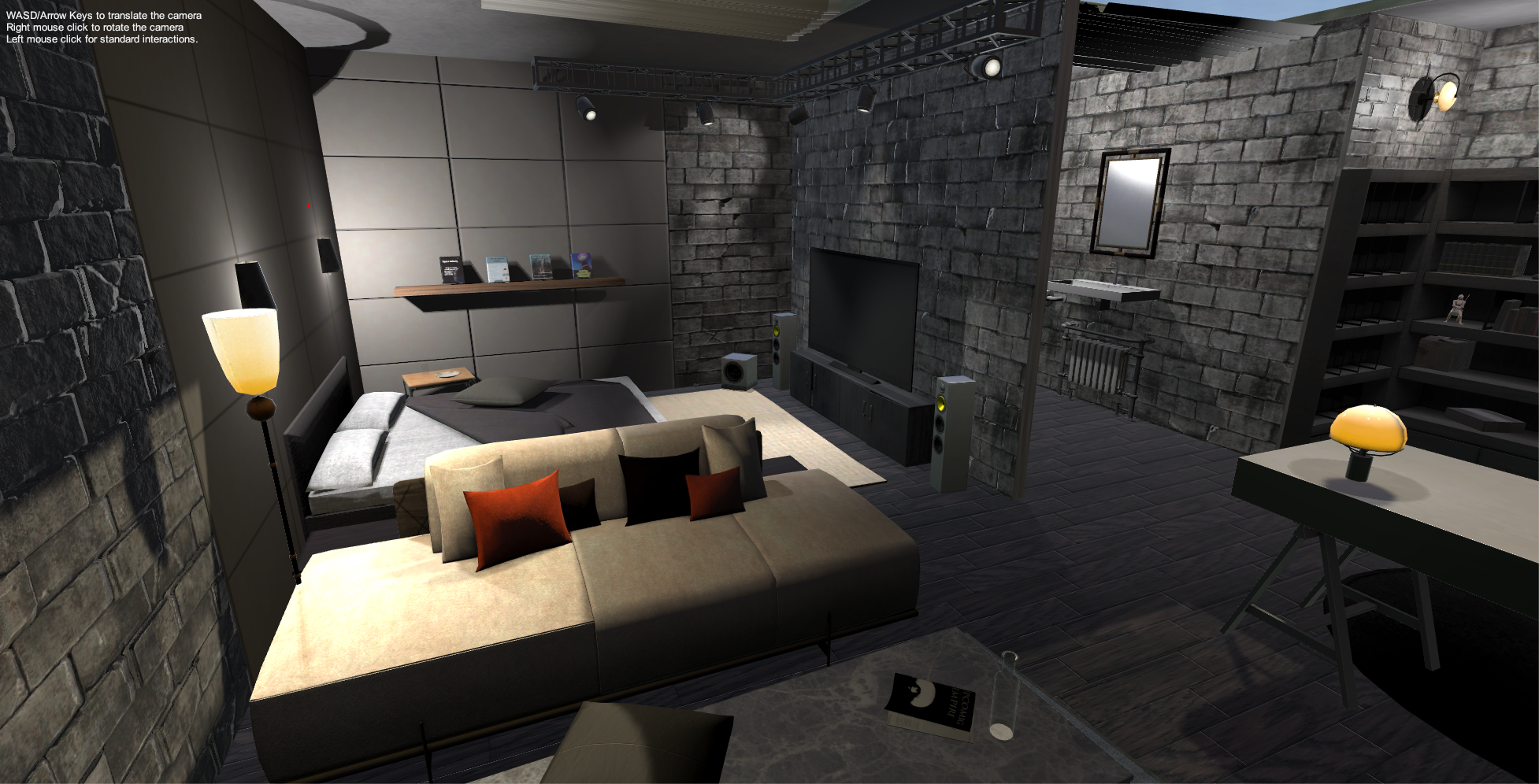 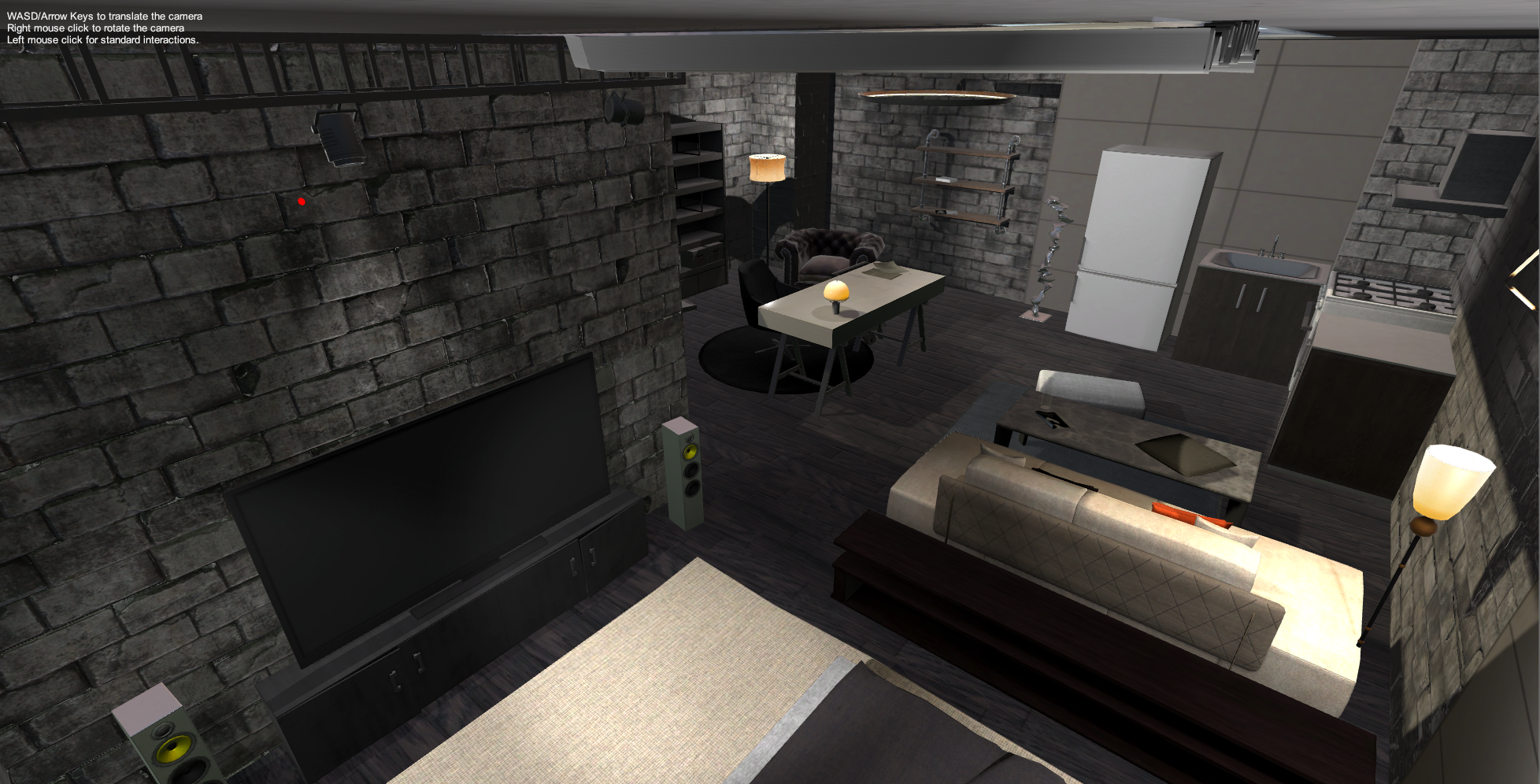 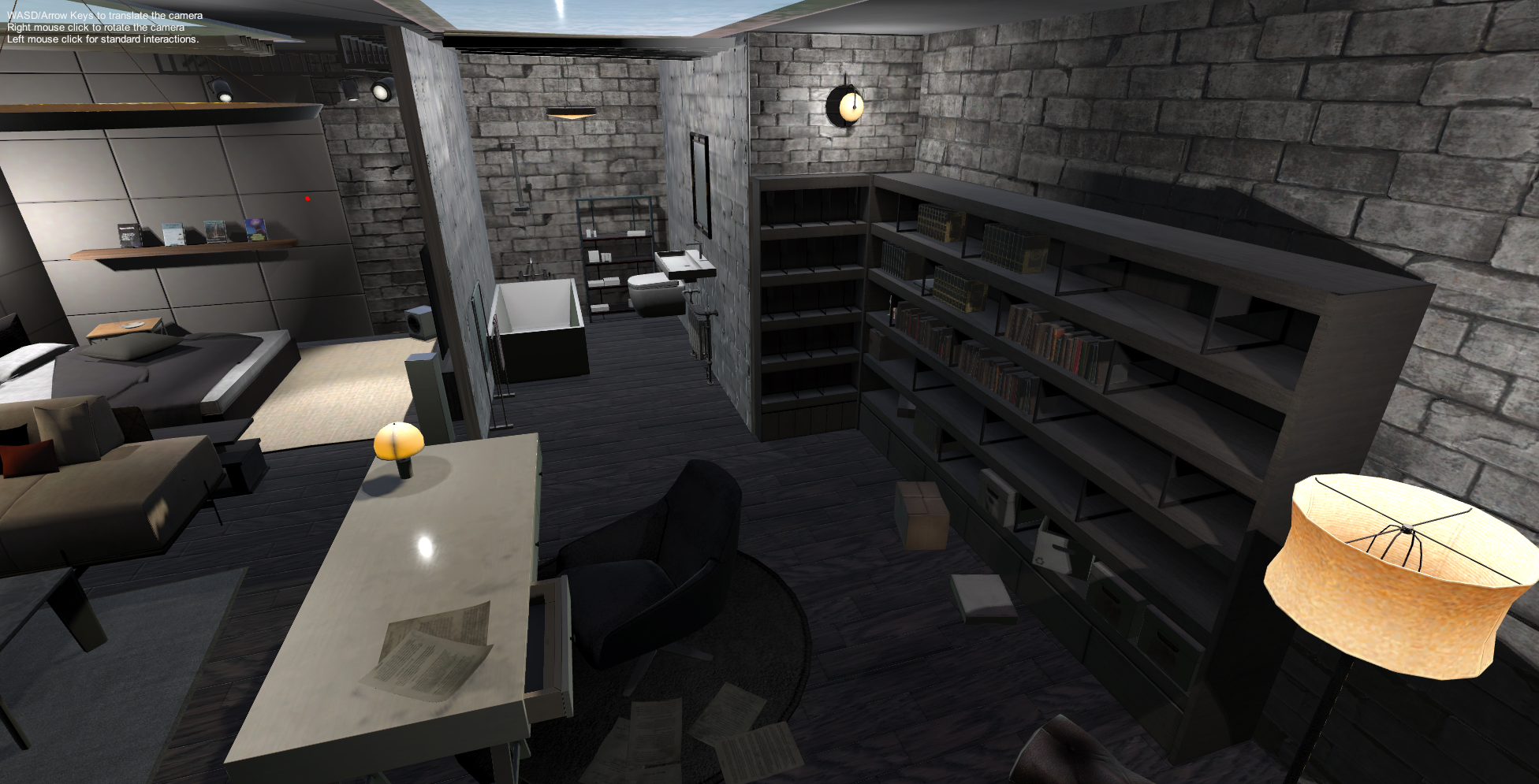 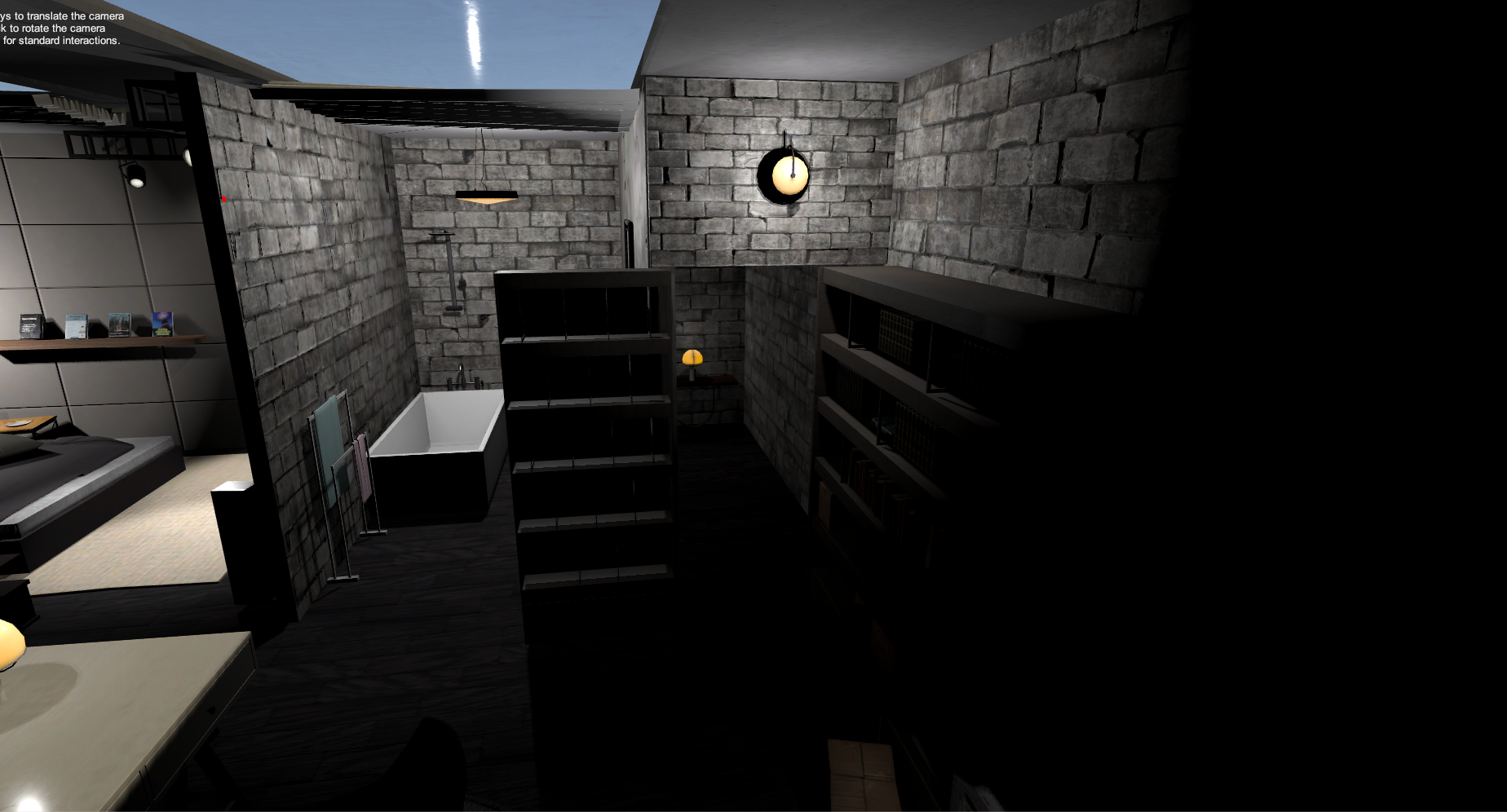 We decided to implement teleporting instead of actually walking around, as after careful testing, teleporting provides better user experience. We have added the teleporting plane to the room, and everywhere in the room that is not blocked by objects are now teleportable.

We also greatly modified our storyline and setting, created a game flow plan on how the puzzles are linked together, and updated our PRD to reflect these changes. Now, the escape room is underwater and water is filling up the room, and the player will need to find a way to get out of the room before the room is completely filled with water. We have finalized the locations of our puzzles and hints. 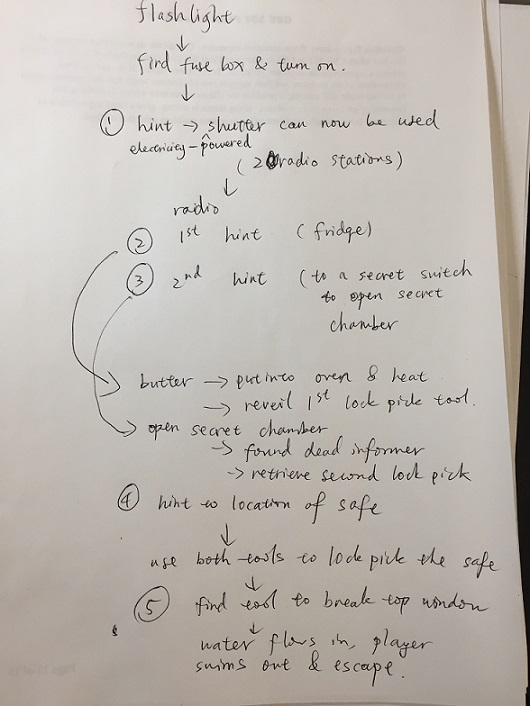 Since radios found in the asset store are not interactable (the frequency knob cannot be turned), we kept digging in the asset store and found an interactable set of knob, lever, and button. We also did research on how to script the interaction of openning/closing the shutters, turn on/off lights, and firing a gun (potential way of breaking the roof window).

For next week, we plan to get most of the puzzles working and interactable (the lock picking puzzles could be complicated and might require extra time). For instance, shutter can now be open/close as user is adjusting the position of a lever, lights can be turned on/off after the master switch is on, refrigerator and oven can be open/closed correctly, etc. Also, we will experiment with adding the effect of the room being underwater (maybe user can see fish swimming from the roof windows), and water filling into the room.

This week, we have devided our work among the four of us. We will each focus on one aspect/puzzle of the game.

Plans for next week:

We have finished our MVP! Here is a video of our MVP: 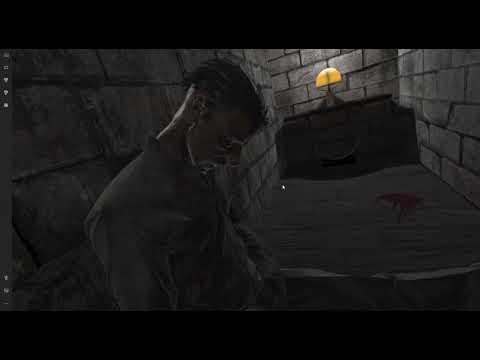 Plans for next week:

This week is a slow week after the hard-work week last week. In last week, we achieved our MVP and most of our target product. Following that is really thinking about what else we need to accomplish.

This week, we finished the UI elements for the game, and were able to build the game into an executable. However, we were not able to demo our project due to a malfunction of our headset/computer (problem with the headset movement tracking).

Last week of class! This week we are mainly working on game improvements and bug fixes.